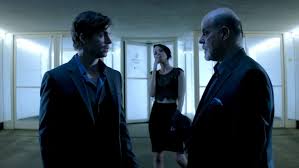 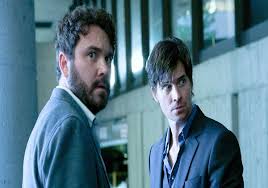 I’m still attending the Fantasia International Film Festival here in Montreal for a few more days. I had the chance to meet up with Director Jacob Gentry to talk about his brand new feature: Synchronicity.The film had its’ World Premiere July 22 at Fantasia,and has a second screening coming up on July 30.

Gentry’s directorial work began in 2007 with the film: The Signal, which played at the 2007 Sundance Festival.The film was shot on a 50,000$ budget and was co-directed/written/produced by Gentry and his college friends in his hometown of Atlanta.

Gentry went on to do work in television; on narrative films based on the songs of Broken Bells,as well as a TV series: My Super Psycho Sweet 16. Synchronicity marks the directors’ return to feature length fiction.

Syncronicity is a homage of sorts to classic Sci-Fi, with a definite 80’s tinge. Neo-Noir would be a fitting genre label, and the film Blade Runner would seem an obvious major influence. But there is much more to this film than any labels, or derivative influences.

Delving into Science Fiction, regardless of a films budget, can often be much more fiction and much less science. Gentry was intrigued by the Hadron Collider experiments at CERN,and this was partly the inspiration for the scientific story at the heart of Synchronicity. He made use of a little known(to this reviewer anyways) organization called the Science and Entertainment Exchange. Here,he was teamed up with a specific researcher that advised him on the scientific underpinnings of the protagonists research in the film, and hoped give it a certain scientific plausibility.

This research has provided the story with a fertile soil for the very intelligent, thought out story line to grow from. The scientist at the centre of the drama is experimenting in time travel, but must re-invent himself as a Chandleresque detective of sorts,to solve the ever deepening mysterious chain of events that his experiments have unleashed.

Chad McNight stars as this ernest scientist: Jim Beal .He stands at the forefront of a scientific breakthrough ,but comes to realize that finding true love may be his biggest discovery of all.

Brianne Davis plays Abby, a Femme Fatale character who could very well be the key to Beals experiment. But she may also hold the key to his heart..

The film has a great visual style with Cinematographer(Eric Madison) on board. Featuring heavy emphasis on expressionistic lighting, great framing and flowing camera movements; the movie has a great neon,smoky, nourish sheen.

Drawing inspiration from the streets and places of his hometown of Atlanta; Gentry has provided his creative team with a unique visual resource to work from,to help craft this imaginary world we are seeing on screen.

Speaking of visuals, I was particularly captured by Gentrys ‘ use of analog effects where possible. Old trick photography techniques including body doubles,as well as very the very cool time lapse and macro photography of liquids by designer Kim Pimmel, are utilized to help give the film some of it’s retro feel. The  shots of the wormhole opening and closing  in Synchronicity ,seemed reminiscent of some of the images from  Stanley Kubriks’ star-gate sequence in 2001.

Also of note is the amazing, retro synth score from Composer: Ben Lovett. Sometimes pounding our senses and at other times drifting over us in a sublime wash of warmth;the score definitely has a throwback appeal. This is partly due to the writing;but also to the use of the original Moog Studios in Asheville, North Carolina.

The composer was able to not only record in the studio, but also to gain access to original equipment and engineers at Moog,to assist in developing the sound palette reminiscent of the score sounds of Wendy Carlos and Vangelis.

But however much the score can sound as a homage to the past, its feet are planted firmly in the here and now.

The same can be said for this new film Synchronicity by Jacob Gentry.

As for our hero?Jim Beal ?