More great films here at the goEast FF ,which has wrapped up now with the awards having been given out a few days ago. Here is a little more about some of the films I was able to check out…

Director Vranik returns to the festival after screening his film Transmision here in 2009. This time around he weaves a very human story centring around a African migrant in Budapest ,who struggles to make himself a part of Hungarian society. He comes into the circle of an illegal Iranian immigrant named: Shirin ,as well as a married Hungarian woman: Maria. This trio of characters become intwined in a fluid relationship involving love and loss,as well as racism ,and responsibility.

I found the film had a strong new- realist influence, as the director studies the socio-economic,race, and immigration issues prevalent in modern Hungary. But he never loses sight of the very human story unfolding before us.

Using a cast including a former economist from Africa and a designer from Iran the film grounds itself in an authenticity that again has echoes of the Italian new-realist movement.

A strong  feature here from Popfilm in Hungary….

This is the story of a German army doctor sent to Latvia in 1917 in the midst of WW I. He does so to report on back on the conditions of the facilitiy looking after wounded soldiers in a dilapidated old manor house.

While sporadic fighting takes place in the surrounding area, the doctor finds that the injured are suffering from unknown illness’ and trauma from the horrors of the war; and he seems incapable of healing them. All he can really provide for them is comfort and compassion and his time doesn’t seems fruitless. That is until he rescues a young boy left alone in the forest, and finds that perhaps he can help him find his way back to civilization.

Wonderfully played by Ulrich Matthes, this film is loosely  based on the the story of Ovids exile. It is a tough, unrelenting movie, based in historical research on WW I, which was the first large scale mechanized war ;and as a result the first war to unleash a wave of mental and emotional suffering on this magnitude.

Filthy is a gritty new film from first time director Nvotova. A graduation work for FAMU, this is an impressive film dealing with the topics of sexual abuse, mental illness, and coming of age.

After being victimized by a family friend and raped, our main character finds herself housed in a mental institution as she tries to cope with the trauma of the event.

Shot in the largest mental institution in Slovakia, a facility little changed since the Communisti Era, the director uses actors and real patients in the wards to give the movie the definite realist edge, and to ground it in the context of modern Slovak society.

Th story deals with  difficult and serious subject, but we never lose sight of the drama and encapsulation of tthe resiliency of human courage.

An impressive first film from Nvotova, and  one would hope for more good things to come from her in the future. 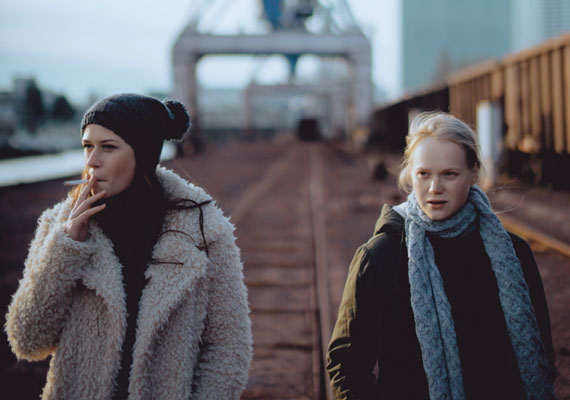 Artur Brauner and his film studio are the subject if this new documentary from director Andersen.

Brauer survived the Holocast in Poland and made it to West Berlin in 1946. Always having been interested in cinema, he convinced his grandmother to sell her fur coat and with this money financed his first film: Moritori.

Shot in the ruins of Berlin, in near impossible conditions, Braurer created a solid drama about the persecution of Jews in WW II. Unfortunately the film was unsuccessful at the cinemas, so Braurer produced a more commercial film next, which proved to be a big success.

With the proceeds from this film, Brauer purchased an old poison  gas factory in Spandau mand here he set up his CCC Studios.

These studios were to pump out up to 18 feature films a year in the 1950s, and Brauer was credited with singlehandedly keeping the Berlin film scene alive after most of the talent had fled following the war.

The studio would go on to produce over 700 films, including  over 250 made by Brauner himself. Although concentrating on commercial fare the studio did make 24 films through the years dealing with the Holocast. These include Wadjas: A Love Story In Germany and the award wining film : Europa Europa.

Now in his 90s Brauner has handed most of the duties of the studio to his daughter ( and director of this film), Kathryn Andersen.

A very cool look at at the father of ” creative producing” ….

A Hole In The Head-d. Robert Kirchhoff (Czech/Slovak-2016)

A documentary styled as an auteur film. This is an apt description of a new film by director Kirchhoff which is the latest in a series of works that include the award winning film : Normalization.

Here the director  has made a film that explores the neglected issue of the persecution of the Roma people’s , and their suffering at the hands of the Nazis during WW II.

Individual stories and remembrances are used to create a film more about the memories of the atrocities of the Roma Holocast, than a researcher-led traditional documentary telling of the story.

This style helps connect the film to its diverse characters knowledge of the past, and to their present day situations; including  their hopes for a recognition of their suffering…..